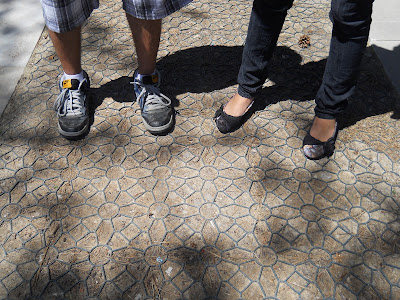 This is what permeable paving looks like at McMaster's test plot on campus (between parking lot G and the North quad residence buildings).
The goal of using permeable paving is for water to seep back into the earth rather than running off impermeable surfaces like asphalt parking lots. An admirable goal, but the current plan at McMaster is to use this in a section of Lot M that has been closed for a construction project for the past three years.
The problem? well firstly, the lot is not needed to meet parking requirements. There remain an oversupply of parking even without this lot, and there appear to be in excess of 1,000 spaces even at peak demand (McMaster University Campus Capacity Study, April 2011). There have been no supply problems during the last three years, so the experience has shown results.
Further, the city and the university have money for a repaving project, but the money could be used instead for creating a 30 metre naturalized buffer between the parking lots in Lot M, and Ancaster Creek, according to the city. The question becomes, how is the money best spent? paving a lot we don't require, or restoring the riparian habitat next to the creek?
The 30 metre buffer is in the Campus Master Plan as a minimum requirement, so it really comes down to making a choice between the old (parking) and the new (restoration) - supporting the intention of the master plan to create a healthier creek could even go much further than the 30m minimum, and look at the hydrology of the land to re-create the wetland lost when McMaster paved over this former Royal Botanical Garden nature sanctuary, known as Coldspring Valley until purchased by McMaster to create parking in the 1960s.
Restore Cootes loves the idea of permeable paving to replace asphalt or concrete lots, however, we do not see any valid reason why McMaster would insist on using the section of Lot M to do a pilot project. It is likely that the lot would be closed during the winters since a permeable lot presents difficulties with standard ploughing operations because "the material was not specifically design to be completely ploughed"(ENGSCTY 4X03 Inquiry Report, 2010, by Tommy Lee).
So a parking lot that isn't needed now, and if built may only be serviceable part of the year, that would take money that could be used for truly sustainable restoration of natural habitat next the a sensitive creek/wetland...let's look at the sustainability big picture!

bowersasphalt said…
This comment has been removed by the author.
February 7, 2021 at 4:54 AM

bowersasphalt said…
Your post is really impressive and it has lots of knowledge in learning.keep share your valuable knowledge with us. Paving companies