triple fatality and a new name

October 03, 2010
We are adding a new feature to the site: historical glimpses of the issues relating to the themes of Restore Cootes.

The dangers of the modern highway become tragically apparent with the first triple fatality on the road (later found to be a result of combining high speed and alcohol consumption);

At the same time, the highway gets a name change to the one we now use: Cootes Drive:


"Two of our major entrances to town have been named, or are in the process of being named. Highway 8 is becoming Osler Drive; Highway 102 is becoming Cootes Drive....These are colorful, historic names for Dundas. They should be put into common use." 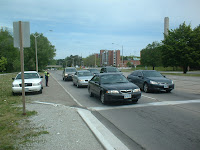 "In an effort to cut down the speeding in the wake of the increased accident toll in this area" police set up speed radar traps on York Road and Cootes Drive. But, as one citizen caught speeding argues, "the area...[is] more of a highway than anything else. It could be inferred that the speed limit was more than 30 m.p.h."(Dundas Star, August 3, 1966)