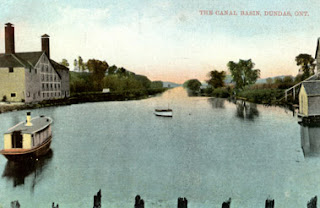 The idea of enhancing the natural assets existing in the east end of Dundas are not new: in fact, in 1968, Dundas Councillor John Prentice put forth a motion after meeting with the Hamilton Region Conservation Authority and Royal Botanical Gardens board members,


"to make Desjardin's Canal and the water in Cootes Paradise navigable for non-power boats, such as canoes. Also recommended was opening up nature trails, eliminating erosion problems by dredging, and general rehabilitation of the whole area.

Included in the plan would be long range objectives such as deepening Spencer Creek, construction of parking space, wilderness areas, upstream projects to reduce erosion.

Councillor Prentice thought action should be taken immediately the recommendations were approved. He said Dundas had control over the area."

Dundas Star December 18, 1968
This area is still ripe for saving from inappropriate developments that would undermine the natural beauty and the ecological integrity of this beautiful land, from Lake JoJo to West Pond, the Desjardin Canal, the Butterfly Gardens, the former green house lands, and the trails to the nearby natural areas.