July 05, 2020
Turtles move slow but they can cover a lot of ground.
When the weather warms in the spring, male and female turtles start to roam, with female turtles seeking nesting sites to lay eggs. They are busiest during May and June, but will be making their rounds anytime between April and October (Source).
The babies hatch later in the summer or early fall and are born into a world of danger, with predators being a top hazard, but roads play a role in reducing the hatchling's survival rates.

Less than 1 in a hundred turtle eggs laid will hatch and grow into an adult turtle. 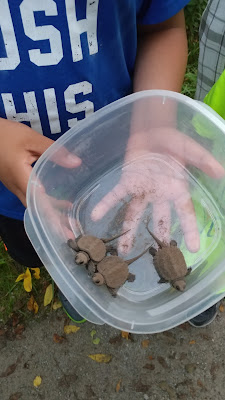 Turtles take a long time to reach sexual maturity, meaning that maintaining a robust population requires protection. Adult snapping turtles, for instance, have a 99% survival rate in the wild, but road mortality tips the scales against them. The loss of a fertile adult female creates a huge deficit in the survivability of the species in a region.
A good source for information on turtles is https://ontarioturtle.ca/turtles/.
We are asking people locally to pledge to avoid using Cootes Drive in order to give at-risk turtles a fighting chance.
If you haven't yet, please sign our pledge (it takes less than one minute to complete) here:
ProtectTurtlesCootes