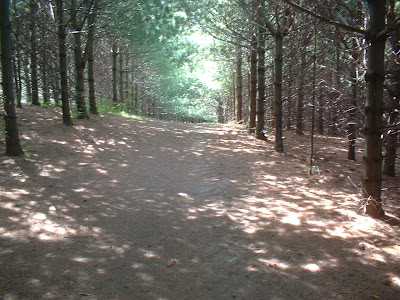 Hamiltonians identify more natural areas as their top priority for additional public spending on recreational facilities. More trails came second in the survey conducted as part of the outdoor recreational study received by councillors earlier this week, but the city is actually reducing annual funding for purchase of natural areas.
The survey asked 800 randomly selected residents to rate more than two dozen recreational features on a scale from one to five, where one meant do not spend additional money and five meant definitely spend more. Just under three-quarters (74 percent) gave natural open space a four or five in the survey.
Trails came just behind with 73 percent, while more playgrounds and park washrooms tied for third place at 72 percent. Only two other categories scored over 50 percent – more picnic areas at 68 percent and more outdoor ice rinks at 55 percent.
Soccer fields, baseball diamonds, splash pads and wading pools got strong support for funding from only between 40 and 50 percent of respondents. Community garden plots and informal play fields were in the top end of this category as well. Amenities scoring less than forty percent included tennis and basketball courts, off-leash dog areas, running tracks and football/rugby facilities. Lawn bowling, bocce and cricket were at the bottom of the list.
Support for more natural open space was consistent across the city, exceeding 70 percent in urban, suburban and rural areas, and everywhere hit 69 percent or higher for more trails. Ancaster residents gave the highest marks to both, but the localized results have a large margin of error because of the survey sample size. The overall survey results are considered accurate to plus or minus 3.5 percent 19 times out of 20.
The support for more trails and natural areas isn’t reflected in the city’s capital budget adopted last week. Last year, $100,000 was set aside for acquisition of natural areas, but staff didn’t include anything in this year’s recommendations. However, the fund got a reprieve when council decided to delay funding studies aimed at eventually expanding the urban boundary for residential development at Elfrida.
The $500,000 allocated for the latter initiative was deferred for at least a year. Because ninety percent of the funding for the studies comes from development charges, the delay only freed up $50,000. At the urging of Brian McHattie and Brad Clark, councillors agreed to put this amount into the natural areas acquisition fund bringing the total now available for land purchases to $150,000.
McHattie and rookie councillor Brenda Johnson had also challenged a $300,000 allocation earmarked for the “aerotropolis secondary plan”, but that spending was approved after staff explained it is being used to fight opponents of the aerotropolis at the Ontario Municipal Board.
The strong preference for informal facilities, rather than those serving organized sports, ran counter to the official scope of the outdoor recreational study, and thus didn’t generate specific recommendations to address resident desires which calls for more sports fields.
“The emphasis of the project is on public-use outdoor sports fields (baseball diamonds, soccer pitches, multi-use fields, cricket pitches, etc.),” stated theconsultant report.  It goes on to list “other facilities to be considered (to a lesser degree)” such as basketball, tennis and bocce courts and other facilities noted above. The list also mentions “roles and functions of pathways and trails within parks”.
But “open space and naturalized areas” and “bikeways, pathways and trail systems outside of parks” are specifically identified as “excluded from the project scope” which calls for more sports fields. However the study authors comment favourably on protection of natural features and encouragement of passive recreational activities.
“The importance of environmental protection and conservation is increasingly being recognized by society and, as people become more aware of the benefits of environmental protection, demand for passive settings and trails that connect people to nature is increasing,” note the authors.
“Municipalities are placing a greater emphasis on the development of passive park space (e.g., woodlots, prairie grasslands, flower gardens, civic gathering spaces, trails, etc.), often ensuring that a portion of new active parks remains in a more natural state. Naturalized park spaces (whether by ‘maintaining’ a site in its natural state or ‘returning’ a site to its natural state) are becoming more popular and are consistent with many of the principles related to environmental stewardship. Naturalization typically involves reduced grass cutting and pesticide use, as well as the planting of native species, which should be accompanied by a public education program to create awareness in the community of the environmental benefits of this approach.”