millions more to encroach on Cootes? 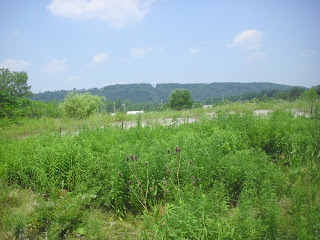 Is anyone really surprised? Cost estimates for the proposed velodrome for Hamilton's Pan Am games have doubled in price, an extra $15 million. They will be spending up to $25 million dollars for this cycling track, and they are still talking about siting it in Dundas, despite the fact the bid originally stated in would be built along with the Pan Am Stadium (and that's another story!).
Problem is, the site in Dundas is in an area that is close to Cootes Paradise, on a former landfill and in the middle of an area that many hope will be developed as a natural park that will enhance the ecological integrity of this environmentally significant area.
As we are seeing in the wranglings over the Pan Am Stadium, the warning of urban philosopher Jane Jacobs against these kind of projects involving "cataclysmic money" stands today.
We should not hastily make decisions that will have a lasting impact on the quality of our natural assets, especially if we are interested in restoring the ecological conditions already degraded by incompatible developments - in the area of Olympic Drive that would include Olympic Drive, the former landfills, the current waste-transfer station, and now rejected plans like self-storage garages.

A permanent Pan Am velodrome will cost $10 million to $15 million more than budgeted, a consultant's report says.
The $11.4 million earmarked in the 2015 bid document wouldn't be capable of serving as a national centre and home for international events in the long term, says the Sierra Planning and Management Group.
The report, which is in the shadow of the stadium debate on today's committee of the whole agenda, says it would cost $21.5 million to more than $25 million for a medium quality multipurpose building.
It would combine recreational and high-performance uses and need to be economically sustainable.
Based on the report, city staff is recommending the more expensive velodrome because it would have a longer lifespan and be more attractive for competitive events and recreational programs.
Staff is suggesting the city approach the federal and provincial governments for larger financial contributions and a sponsorship firm be asked to develop a prospectus to sell naming rights and other sponsorship opportunities.
Greg Mathieu, CEO of the Canadian Cycling Association, said the $11.4 million figure in the Pan Am bid book was always seen as unrealistic and the $21.5-million to $25-million velodrome would become a cycling centre for Canada and all of the eastern United States.
The only other 250-metre track, the size needed for world-class events, is in Los Angeles.
Mathieu said a track of that calibre would draw major racing teams and tournaments as well as strong school and recreational projects.
"It would be a magnet for the best riders and the company teams," he added, noting that could lead to possible revenue from sponsorships and signage.
Mathieu added the infield of the track would provide space for court sports, giving the facility plenty of flexibility for city sports programs.
The velodrome is in Pan Am plans for the west harbour site, but the National Cycling Centre Hamilton has been promoting Olympic Park in Dundas.