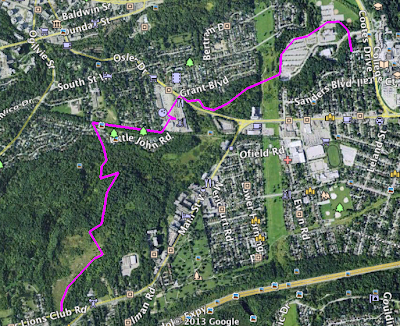 How big were McMaster's expansion plans in the 1960s? We know they agitated for and received just under 160 acres of Royal Botanical Gardens property in 1963 for a total of $240,000.00 (and much regret from the RBG directors), the two almost equal parcels being the land where the Sunken Garden was located, now the Hospital site, and the other Coldspring Valley Nature Sanctuary, now the West Campus parking lots.

Around the same time, McMaster also acquired two parcels of land totalling about 115 acres accessible off Lower Lions Club road. It is also accessible on foot from McMaster Lot M parking following official and unofficial trails, and some sidewalks and the parking lot of University Plaza.

An unconfirmed report by a long-time McMaster employee holds that McMaster was planning a satellite campus at the second location that would be linked by extending a roadway (a McMaster road known as Westaway Road) up the river valley. Thankfully, this never happened, and it sounds like there is very little chance that McMaster would be able to develop the property given restrictive zoning on the land meant to secure it as natural lands.

So, as for the pink line on the above map, that is a GPS track of a route to get between the two McMaster properties that we created, which starts at Maria's Walk. (More on the corridor later)