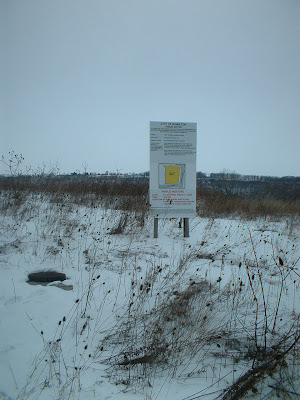 The Hamilton Conservation Authority is offering to host talks aimed at finding a friendly way to stop a controversial proposal to build a self-storage facility at the eastern entrance to Dundas.

After more than two hours of presentations and discussion, board directors last week deferred voting on a resolution opposing the development to allow for a meeting between proponent Doug Hammond and a group of residents headed by former Dundas councillor Joanna Chapman.

Authority chair Chris Firth-Eagland said he’s encouraged both Ms. Chapman and a lawyer representing Mr. Hammond committed to meet to review options for the vacant property, located at the northwest corner of King Street and Olympic Drive. He said the two-hectare site, purchased by Mr. Hammond from the former regional municipality in 1999, “would make a lovely community acquisition,” describing it as a pinch point between the Dundas Valley and Cootes Paradise.

“With all due respect to Mr. Hammond, he did buy the property, he has borne the burden of studies, counsel, taxes, and he has every right to improve his purchase position over that amount of time,” Mr. Firth-Eagland said.

“He has an expectation, I’m sure, and I appreciate that, personally. Notwithstanding, I would very much like to see it in community hands with opportunities for rehabilitation,” he said. “It is a gateway to our community.”

Mr. Hammond did not respond to a message seeking comment for this story.

His lawyer, Brian Duxbury, said he wasn’t yet sure whether he or Mr. Hammond would attend the proposed meeting, or if selling the land to the community is an option.

“I don’t know the answer. It’s going to take some discussion to see whether some ideas come out of that,” Mr. Duxbury said. “I did hear that the conservation authority is prepared to try and facilitate it, so they’ll bring some input to it.”

For her part, Ms. Chapman said she is remaining optimistic about the meeting but is concerned the owner will have little motivation to change his plans as long he believes he can make more money by proceeding with the storage facility.

The proposal requires city approval to rezone the property for highway commercial uses. It is presently zoned as parkland, a designation allowing a range of recreational uses and restaurants.

“It’s a pretty major change which is being asked for. There’s no conceivable way that a self-storage facility can be considered to be an extension of a park and recreation zoning,” said Ms. Chapman, whose group has offered to help raise money to buy the property.

“It’s not the right location for something like this,” she said. “Self-storage warehouses belong in industrial areas, in industrial zones.”

But Mr. Duxbury told authority directors last week that although the property is by an environmentally sensitive area, it has long been earmarked for development, noting neighbours include a municipal waste transfer station, fire training centre and baseball diamonds.

He said a storage facility is “a very benign use” that will see little traffic, extensive tree planting and work to stop migration onto Volunteer Marsh of clay fill placed on the property’s western edge during the expansion of the Dundas sewage treatment plant.

“It’s not a pristine environment. This is a mixed environment,” Mr. Duxbury said, citing support of city planners and an environmental impact statement paid for by his client among other relevant considerations.

But Ms. Chapman and three co-presenters said the property is an important link between Desjardins Canal, surrounding marshes and Lake JoJo, and that its existing zoning reflects the former Dundas council’s desire to see compatible uses.

Besides being a popular spot for waterfowl, the area is home to three species of turtles, including the nationally endangered Blanding’s turtle, directors were told.

“It will generate heavy traffic in a totally unsuitable location,” Ms. Chapman said, disputing Mr. Duxbury’s assessment of the storage facility’s impacts and importance of the property.

“(The site) has been abused, terribly abused. It has gone from the wetland I first remember it (being) to the mess that we see there now,” she said. “To say that the land is of no environmental value is simply not correct. The land has been drained and the site needs reparation, but the potential is still there, waiting.”