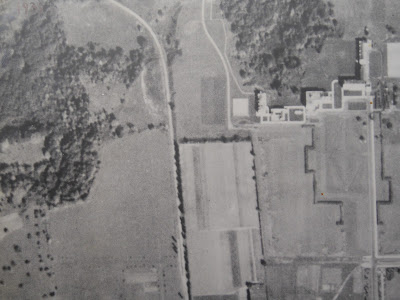 A 1931 aerial view of Binkley Hollow (to the left of image) and McMaster University, newly located to Hamilton from Toronto (to the right of image) - the long line that starts at the bottom of the image in the centre and curves off to the left at the top is the Hamilton and Dundas Railway that served commuters between these distinct places from 1879 until 1923, and then served the T.H. & B. railway as a freight line until 1987. Part of the railway is now a section of the paved multi-use path beside Cootes Drive.

In a few years (1936) construction of highway 8D (the Dundas Diversion) would begin on a a four lane divided highway between Hamilton and Dundas, a distance of "two-and-a-half miles".  What we now know as Cootes Drive was a project of the Provincial Highways Department under the tutelage of the Hon. Thomas B. McQuesten, the Hamilton politician who was Minister of Highways.

Interestingly, the road was deemed unnecessary by politicians in Dundas, but since the road was being paid for by the Province, Hamilton and Dundas went along with the plans. The placing of the road, while insignificant to local transportation needs, fit into a larger scheme under McQuesten.

"[McQuesten] wanted to make sure…innovation in road construction was understood and supported by motorists in all sections of the province. Accordingly a few miles of divided highway was begun [at various points in the Province]" according to McQuesten himself "to let people see and know by experience what we are undertaking, because after all that is the only way in which to get progress in highway development.'"(Thomas Baker McQuesten: Public Works, Politics and Imagination, John C. Best)

A few decades after the road, expansion of McMaster University obliterated the forested wetlands of Binkley Hollow to provide parking lots for drivers, who were projected in 1969 to number 7,000 by 1980. Those numbers never materialized, and there are today less than 4,000 spaces on campus lots, a thousand or so unoccupied at peak demand.

The fact that wetlands were filled in to create the roadway and later parking leaves a legacy that harms species at risk, including Blandings turtles, who are run over by cars and trucks, threatening their survival in this area. Of course putting a roadway through a marsh pretty much guarantees such outcomes, but the question for today is, will we continue to accept the historical loss of habitat in what is really the heart of Hamilton's ecological existence, Cootes Paradise marsh? Can we remake our ecology with our new awareness?