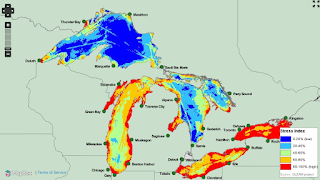 University of Windsor biology professor Jan Ciborowski contributed to the map. He told CBC Hamilton that Lake Ontario and Hamilton Harbour are among the highest stress areas due to a combination of stressors: "[It's] not only population but also loss of habitat, the historical discharge of chemicals, and invasive species like zebra mussels and round gobi fish."


"It's the 'death by 1,000 cuts' idea: just restoring one thing may not be enough," Ciborowski said.
"You have to fix one thing at a time, but just getting of one stressor won't fix the whole area."

This attention to multiple stressors gives us reason to be encouraged in our advocacy to have McMaster University scale back west campus parking in order to restore the floodplain of Ancaster Creek (identified as a stressor in the local environment by the Hamilton Conservation Authority.)

Gail Krantzberg, a McMaster engineering professor who specializes in Great Lakes restoration explains that "It's always going to be a place where we're constantly fixing and protecting ... but if we have our eyes open to various stressors, then we can make strategies for how we develop in the future." (CBC Hamilton)

The second mapping project is funded through McMaster's Forward With Integrity programme. MAPPING PARADISE (web site: http://mappingparadise.wordpress.com) is "A collaborative art project addressing issues on the preservation of Cootes Paradise and the Niagara Escarpment."

The goal of the project "is to bring awareness about the several groups working on restoration of Cootes Paradise, the Niagara Escarpment and the proposed trail systems and environmental issues within Cootes Paradise’s watersheds." Students in McMaster's ART 2ER3: The Environmentally Responsible Studio will steer the project by choosing how to interpret the idea of mapping this region, and will culminate with an art show during the last week of February 2013.

Restore Cootes has been invited to meet with the participants and we are sure that a positive collaboration will result in more attention to the role McMaster has in restoring degraded wetlands under their control.