Meanwhile on the Main Campus C1968

November 28, 2012
While McMaster expanded onto former Royal Botanical Gardens' property in the late 1960s, much of the attention and opposition to the expansion was focused on the main campus property, and less concern was given to the flood plain in west campus as Coldspring Valley was filled-in and paved.

You can almost understand why the focus was on the main campus, given this was the location of  RBG's Sunken Gardens: 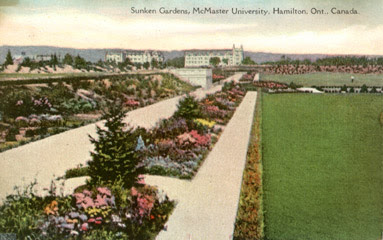 "In 1963, the Royal Botanical Gardens gave the university 130 acres for expansion but the university stressed that they were not eyeing the Sunken Garden property.

“I know of no future plans to remove the Sunken Garden. The university intends to maintain the natural beauty of all the land,” stated a university spokesman.

A short time later, McMaster announced plans for a health sciences centre on the grounds of the university and the province agreed to grant them $65 million for the project.

Problems soon arose over the location and design and how the proposed facility would impact the neighbourhood and the Sunken Garden. Although the plans seemed to show that the Sunken Garden would remain untouched, that was not the case.

In the week of May 1968 the university invited people in to take shrubs, soil and plants away and by May 11th the Sunken Garden was a shambles…

In the fall of that year the remnants of the Sunken Garden were bulldozed and construction began on what was to become the McMaster University Medical Centre.” 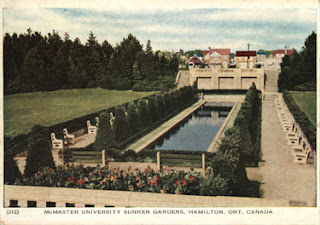 On Oct. 21, 1968, 'McMaster's' famed Sunken Garden was bulldozed to make way for the new, enormous Hospital (or as one university professor disdainfully later referred to the new building, "an oil refinery.")

The Sunken Garden was built in 1929 with landscaping by famed landscape architects, the husband and wife team of Howard and Laurie Dunnington-Grubb.