Dundas and the Velodrome

September 22, 2010
Russ Powers has confirmed that he does not support a Velodrome at the Dundas site suggested by the National Cycling Centre Hamilton (NCCH).

In a brief phone interview today, Powers said unless directed otherwise by the new council (after October's municipal elections) he was against the Velodrome being built on the soccer field across from the Olympic Arena. 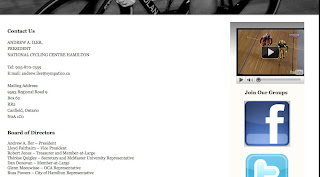 He listed several concerns about that site, which included the proximity to an Environmentally Sensitive Area (ESA), that it would have to built on the site of a former landfill, and the loss of a recreational soccer pitch.

Powers, who was originally the city representative on the NCCH board of directors in the "early stages" of that organization, is no longer a director (though he was still listed as such on their web site as of today.)

He said the Sierra Group did the site selection criteria for the Pan Am velodrome siting, and did not list potential locations. Sierra was hired by the city of Hamilton.

So no Veldodrome in Dundas.