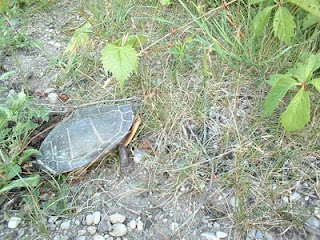 
Closing King Street East near Olympic Drive to car traffic was suggested as an option for making 201 King St. E. a more viable turtle nesting area during Day 6 of the Ontario Municipal Board hearing appealing Hamilton city council's decision to reject a self-serve storage development on the site.

Julia Croome, lawyer for community group Protect Our Dundas, raised the possibility of closing the road separating the Desjardins Canal from the subject site, Volunteer Marsh and Lake Jojo during cross-examination of two witnesses presenting evidence on behalf of property owner and appellant Doug Hammond.

She raised the idea after environmental consultants Karl Konze and James Kamstra suggested the site was not a preferable option for turtle nesting– although they found five nests on the site and eight nests across the street at Desjardins Canal last summer. After Konze said preferable nesting sites are away from roads and road shoulders, Croome asked if he’d support closing King Street East between the former Veldhuis greenhouse property, now owned by the Hamilton Conservation Authority, and the site in question.

“It would make sense for all the roads around Cootes Paradise,” Konze said.

Later, ecologist James Kastra said: “The property does provide some function as a nesting habitat for turtles. However, the nesting function is low.”

He said the site is only useful when it is disrupted, as it was when his client placed fill on it, destroying any natural vegetation.

Over time, as vegetation is allowed to grow, he believes the site becomes less useful for turtle nesting. When OMB hearing chair J. P. Atcheson asked if it’s reasonable to maintain the property for turtle nesting, Kastra responded: “I think as long as the road is there, it’s not appropriate.”

Atcheson noted the evidence indicates a breeding habitat requiring turtles to cross a road becomes a significant impediment to their survival. During cross-examination of Kastra, Croome again asked if he agreed closing the area of King Street East to traffic would remove a barrier within a wildlife corridor and make it safer for turtles to move from the Desjardins Canal to marsh land and nesting areas.

“You’d agree with me that if King Street were closed to traffic, it would alter your analysis,” Croome said.

“It would make it better for turtles,” Kastra said, adding anything can be improved if there is a “will and a way” but suggested the reality was the road will not be closed and he can only consider the facts.

But Croome said the City of Hamilton is fighting the appeal and is opposed to the rezoning and official plan amendment applications. She said the city has the authority to close the road.

Kastra said he didn’t know that, and Atcheson jumped in.

“That hasn’t been introduced to me in evidence,” the chair said about the idea of closing any part of King Street East to vehicles. “Maybe it’s forthcoming."

The property owner’s case was expected to continue at least the rest of this week, with city planner Edward John and HCA staff member

Kathy Members among the most anticipated witnesses.

Statements from the public are expected to begin next week, followed by witnesses called by both the City of Hamilton and POD in support of the city’s decision to reject Hammond’s amendment applications.

The hearing is open to the public, Room 6 of the McMaster Learning Centre, 50 Main St. E. The hearing is scheduled to last four weeks.