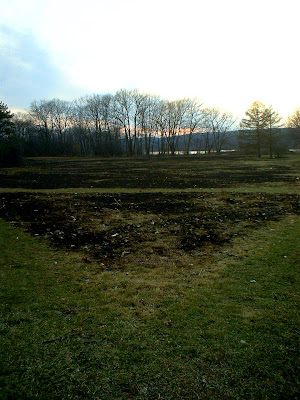 An image of Princess Point after a contolled burn by the Royal Botanical Gardens, part of their effort to maintain now rare Oak Savannah habitat. The area of Cootes Paradise is beautiful, and these ongoing restoration and conservation projects are necessary and good; but we must ignore the loud and poisonous highways adjacent to this natural area. The sound of traffic penetrates even the remotest parts of the Cootes sanctuary, detracting from the tranquility that would otherwise offer respite.

Reducing speeds might be a way to reduce the noise pollution on highway 403 at the eastern end of the marsh. "The Noise Pollution Clearinghouse recently reported that when we raised the speed limit from fifty-five to sixty-five miles per hour, it was the noise equivalent of doubling the number of cars on the road." (Hundred Dollar Holiday, Bill McKibben).

Closing Cootes Drive and restoring the wetland at the west end of the marsh would obviously do much for this area's natural potential. Efforts to preserve the natural area will always be hindered by the proximity to high speed, multi-lane highways, so if we want to restore nature, we, at some point, will have to address the pollution caused by roads and traffic.